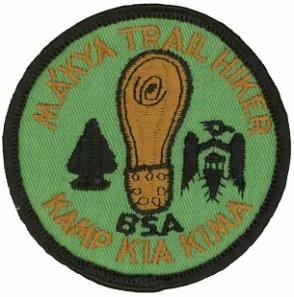 The original Ma’kya Trail was designed and built in 1971 by Explorer Post 331. Post 331 was an Explorer Post focusing on service projects and was largely comprised of Kia Kima staff. The Post Adviser was Dan McGuire (also serving as Cherokee Aquatics Director at the time) with Frank Mund as the Associate Adviser. Several Explorers at the time included Johnny Fletcher, Ron Naro, Doug Whitney, Steve Whitney, and Bill Graves.

The idea for a hiking trail at camp sparked from a conversation with Frank Simonton, the Camp Director. Dan McGuire and members of the post met with Joe Clarke, the camp ranger, who helped them plot out a new trail on a property map. On February 10, 1971, Dan McGuire and Bill Graves presented their plans for a five-mile hiking trail to the Chickasaw Council Camping Committee. The committee was receptive to the idea but asked for one change: make it longer. They asked the post to extend their proposed trail from five miles to ten miles so that it could satisfy the hiking requirements of Second Class.

Dan McGuire returned the following month on March 10, 1971, with updated plans for the proposed trail. In addition to the map, he also presented on behalf of the post a proposed patch that could be earned by Scouts. The patch would sell for fifty cents and all net profits from the trail patch would go into the camp operation budget. If at any time Post 331 discontinued operating the trail, the operation and equipment would be assumed by the council. A motion was made and passed by the committee to give Post 331 the authority to build their new trail.

Post 331 quickly began work that month on building their new trail, and it took a lot of steady, hard work to get it ready in time for the summer. Dan McGuire recalls using a twenty-five yard piece of a rope to measure the trail as they worked. The Explorers would “leap-frog” down the trail as they blazed through the woods to get a fairly accurate 10-mile trail. The original trail markers were metal lids from cans that were painted orange and nailed to the trees. A single can lid was simply a trail marker; two can lids with a number indicated where a hiker would need to take a compass bearing. After two or three weekends, the trail was finally completed and ready for the 1971 summer camp season. The name Ma’kya Trail was selected. Ma’kya is a Hopi word for eagle hunter. 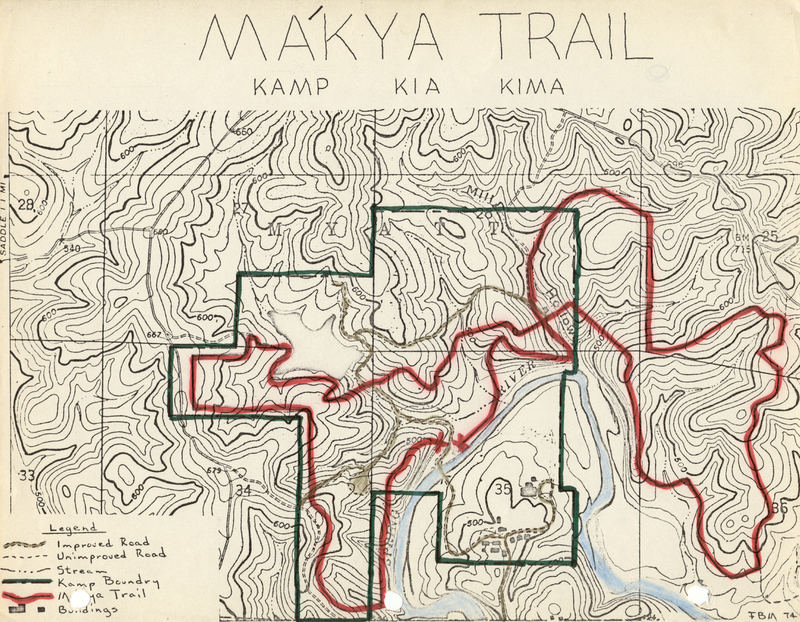 The original 10-mile trail followed meandered far outside the camp boundaries following several old logging roads and dry creek beds. Scouts hiking along the trail would see many different points of interest, some of which can still be found today while others have disappeared back into the hills of the Ozarks. Hikers in the early ‘70s would see a natural spring; an old saw blade dated June 1902; a broken caterpillar track; Spanish moss; an old homesteading cabin made of hand-hewn logs; an old homesteading site with a rock wall and the remains of a porch foundation; the remains of a sawmill; a 70-year-old wagon rim; an old gravesite with a simple, plain stone; and several other things. The trail guide gave this description for another one of the points:

This old homestead site was probably a three room cabin with a porch. Although most of the roads in the area at this time were used to haul railroad ties, the remains of a Model-T Ford are found here. The cabin burned about 1935.