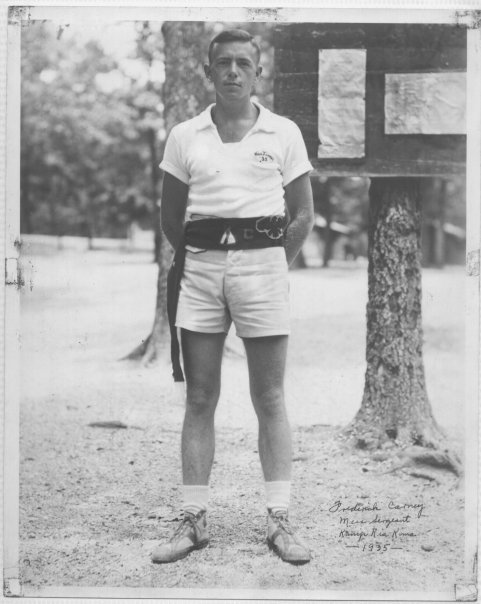 Scouts attending Kia Kima in the early years had the opportunity to achieve the Kamp Emblem and become Emblem Scouts.

The Emblem evolved over the years and eventually became the iconic Kia Kima sash: a felt sash with white fringe that was worn around the waist and tied in an overhand knot on the right side.

The Kamp Emblem was the highest achievement at Kia Kima, and it required Scouts to "become well acquainted with many of Nature's secrets and learn how to take care of themselves in the open." (1930 Kia Kima Leaders Guide).

To earn the Emblem, Scouts had to complete a variety of requirements proving their Scouting skills, including swimming in the South Fork River, signalling with semaphore flags, improving the camp, and advancing in Scouting.

The first documented mention of earning the camp's Emblem is in an article appearing in the July 10, 1921 issue of the Commercial Appeal newspaper in Memphis:

Jeff Hicks . . . was awarded the camp emblem of the three "K's" and the flaming arrow last week at Kamp Kia Kima, the Boy Scout camp at Hardy, Ark. This is the highest camp honor awarded to a scout, and an impressive ceremony marked the occassion.

It is unknown what this Emblem was or looked like as, but the Emblem changed form several times over the years.

The origin of this felt segment is unknown, and it could be a 1925 emblem. If this is from 1925, and not simply backdated to an individual's first year at camp, then this is also the earliest thunderbird.

The following year, in 1922, the Commercial Appeal provided a glimpse into earning the Emblem to its readers in Memphis:

One month of this season gone at Kia Kima finds every scout busy in a race for the first honors to get camp emblems. As the time approaches for the finishing of the tests the boys are putting in every spare moment in study. The fall above camp is the scene of groups of boys cooking one of their meals outdoors as a test in cooking. On the hill knolls may be seen boys with semaphore flags waving messages to another ambitious scout in a ravine far below, who will receive it as another test in scout advancement.

Associate Director Craig gives every boy a chance to get this emblem by limited the number of tests and making them practical and short enough that they may be completed in a two week's period. Making a further step in scout rank than his present standing is one of the requirements. If the scout is a first-class scout, he is expected to advance to at least one merit badge. John E. Roberts, chairman of the Chickasaw Council Court of Honor, has authorized the assistant directors to take the examinations in first and second class and 25 merit badges.

It is required, too, that the scout must keep silent for four hours, making no vocal noise whatsoever. Before starting this test, however, he must meet at some stated place far in the woods and receive the sign that marks him as on the silent test. It is not one of peacefulness, as the name might suggest. Everyone in camp has the privilege to try after one of the silent scout's scalp. They may use methods of ridicule or anything to make them laugh or speak or make a noise. The scout who passes through this test is the one who has exercised much self-control and stood a lot of joking and molesting from his lodgemates. It is all done in good spirits, as those who lose their scalp are given another chance. . . . 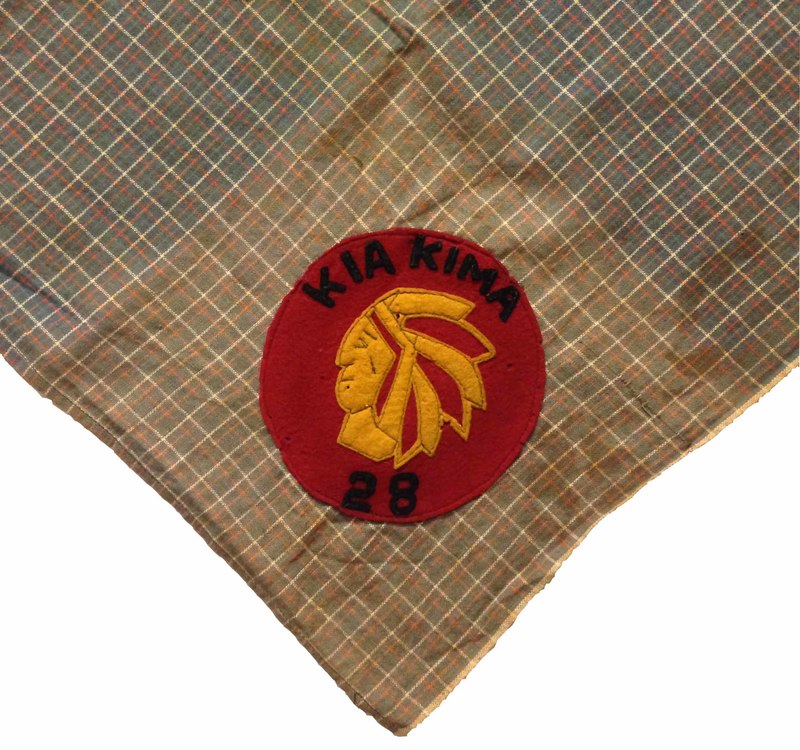 While it is uncertain the nature of the earlier Emblems, the emblem in 1928 was a neckerchief.

In 1929, the Chickasaw Council newsletter teased a new form of Emblem: "The Kamp Emblem this year will not be a neckerchief, but will be something that all of the boys have long wanted to have. This will be announced in the near future, and Scouts who win it will be very proud to wear it." (Council Fire, June 19, 1929). 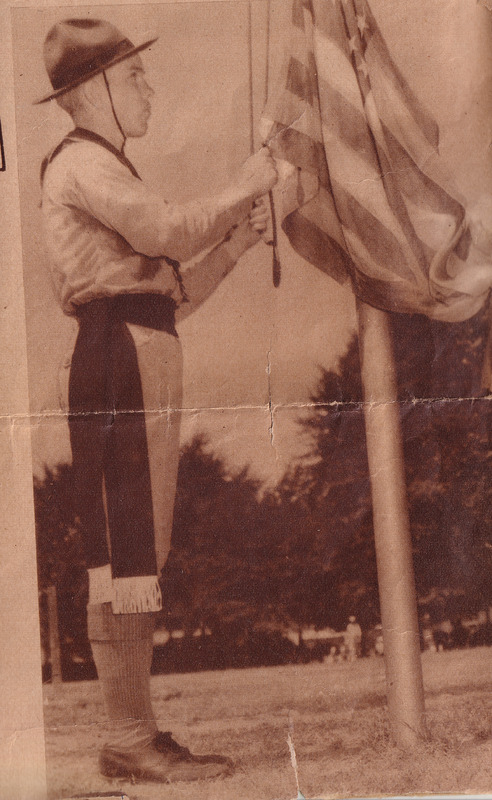 In putting "out" in Scouting, boys become well acquainted with many of Nature's secrets and learn how to take care of themselves in the open. Kia Kima awards a camp emblem to campers who pass the required tests. To win an emblem a Scout must:

1. Advance in rank or take one Merit Badge.
2. Swim river under supervision of Life Guard.
3. Pass Silence Test (4 hours).
4. Go on Grumble Hike (overnight and at least 5 miles).
5. Provide camp entertainment at camp fire or in show.
6. Do 4 hours of camp improvement.
7. Make leaf prints of 5 different species and identify.
8. Identify leaves of 15 different trees.
9. Make a star map from observation.
10. Find and place in camp museum one of the following: Peculiar rock, snake, lizard, shell or other object not commonly found around camp.
11. Make Leola.


Scouts are proud to receive this honor, for it signifies they have started on the trail leading to a fine knowledge of the great out-of-doors.

A "Grumble Hike" required a Scout to "hike at least five miles, camp out overnight, cook his own food and live in the open, making the best of conditions as he finds them, and all without grumbling or complaining." (Memphis Scouts are Enjoying Camp Life, Commercial Appeal, July 25, 1928, at 15).

It is uncertain what "Leola" is in the "Make Leola" requirement.

The Camp Director's Report for the following year has a few different requirements. Instead of making leaf prints, Scouts were required to simply make an article of Handicraft. Instead of making a star map, Scouts had to point out three constellations and know the history of one of them. Finally, the "Make Leola" requirement was changed to having the approval of the staff. (1931 Kia Kima Camp Director's Report, at 19).

Campers would wear black sashes with red lettering while staff had red sashes with black lettering. The Kia Kima initials were in the middle of the sash and were worn on the left hip. Underneath the initials was the year the sash was earned.

Scouts would receive a specific patch for each subsequent year that the Emblem was earned. Other patches that could be earned were an Eagle Scout patch (replacing the Kia Kima initials), a boating activity patch, a Lodge Leader patch, a CS for Council Scouts, and an Order of the Arrow patch. Some sashes also had the wearer's American Indian name from the Council Scouts. Some sashes also have rank advancement displayed on the sash.

Scouts earning the Emblem for subsequent years earned patches to put on the sash: 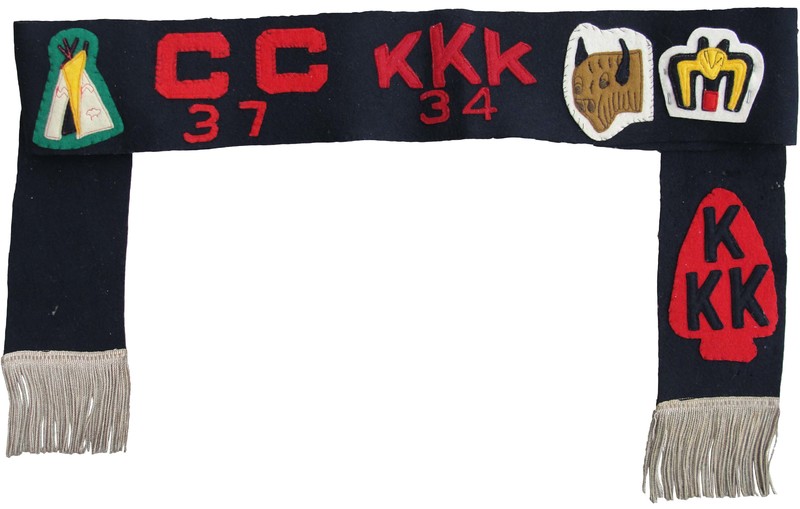 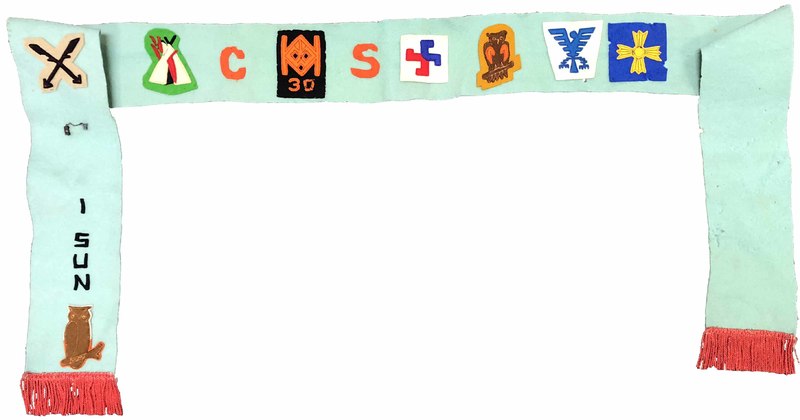 Kamp Kiwani, the Girl Scout camp just down-river from Kia Kima, had similar sashes and patches that were sewn by the same seamstress in Memphis. Kamp Kiwani's program was similar to Kia Kima's in that patches were earned for consecutive years, the staff and campers had different color sashes, and Council Scouts had special patches to signify the honor.

The program eventually phased out in the mid-1950s.

In 1953, a Special Camping Committee, ingiving long-range recommendations to the council, recommended that a "camp emblem award, such as a sash, which can be earned each year as a progressive emblem, should be established, and wide publicity should be given in the Council to the winners of these awards." (Report of Special Camping Committee, Chickasaw Council, 1953, at 3). Sashes exist from 1948 and 1952 with multiple patches on them, suggesting that either the emblem program still continued and the committee was simply mistaken, or the program ceased for some time.

Below are a few examples of the sashes. More images are available in the Sash Collection. 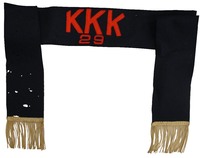 An early example of a Kia Kima sash.

Sashes were worn at both Kia Kima and at Camp Currier.

The eagle patch with the camp initials denotes an Eagle Scout.

Kamp Kiwani's sashes were made by the same Memphis seamstress and they shared many of the same patches.