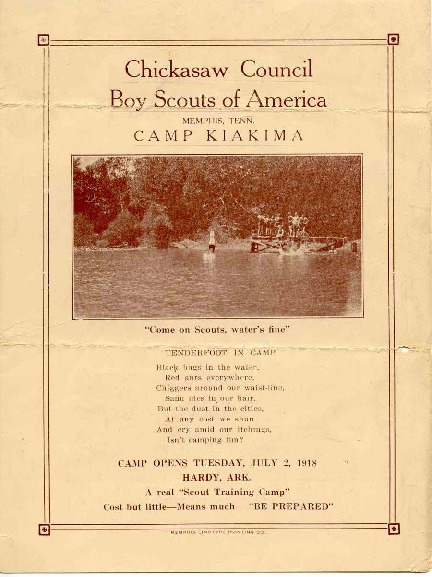 From the Zuni language, Kia Kima translates as "eagles' nest" and has been in use since the camp first opened in 1916.

It is unknown how these Memphis-based Scouts learned of the name of the small historic Zuni pueblo in the 4-year-old state of New Mexico, but the name somehow made its way to the Arkansas Ozarks, and its translation has inspired generations of Scouts.

The spelling of "Camp Kiakima" was inconsistent for the first several years. Spelling it with a "C" in "Camp" and "Kiakima" as one word appears more commonly. (Memphis Boy Scouts Make Much Progress, Commercial Appeal, Nov. 6, 1916, at 7); (Boy Scouts Camp Out, Daily Ark. Gazette, Jun. 24, 1917, at 5); (Boy Scouts in Camp, Ark. Democrat, June 26, 1917, at 6). But then again, the first documented use of "Kamp Kia Kima" is in a December 30, 1916 newspaper article discussing the Chickasaw Council's annual banquet. (Scouts Banquet at "Y.", Commercial Appeal Dec. 13, 1916, at 5). Even the camp had trouble with consistent spelling: the 1918 Leaders Guide spells it "Camp" on the cover, but the same document uses the "Kamp" spelling elsewhere, and all with a single-word "Kiakima." (1918 Kia Kima Leaders Guide).

The first documented translation of the name is in the 1929 Kia Kima Leaders Guide: "On Saturday, June 15th, the first camp fire will be lighted and for ten weeks following[,] 'Eagles Nest' will afford the opportunity of living close to Nature in one of the finest Scout Camps in America." (1929 Kia Kima Leaders Guide, at 4). However, the translation must have been known from the beginning and was the primary reason the name was adopted.

The name Kamp Kia Kima and the accompanying initials were used until the fall of 1976 when the name Kia Kima Scout Reservation was adopted. The spelling of "Kamp" and the initials were phased out due to negative connotations, and the Scout Reservation designation followed the national trend reflecting that Kia Kima had multiple sub-camps (Camp Osage and Camp Cherokee) within one property.

Kiakima was an ancestral Zuni village or pueblo at the southwest base of Dowa Yalanne, a mesa outside of Zuni Pueblo, New Mexico, on the Zuni Indian Reservation. Dowa Yalanne is translated as Corn Mountain, but the mesa has also been called Thunder Mountain due to its role in Zuni mythology as the "House of the Gods and the making of rain, lightning, and thunder." The Spaniards called the mesa Peñol de Caquima, which was the Spanish attempt at spelling Kiakima. Kiakima was one of the rumored Seven Cities of Cibola or the Seven Cities of Gold of which the Spanish conquistadors heard rumors. The Seven Cities of Cibola included Hawikuh, Halona, Matsaki, Quivira, Kiakima, Cibola, and Kwakina.

It is estimated that Kiakima was occupied from about 1400 A.D. to the mid-17th century. The Handbook of American Indians North of Mexico (Federeck Webb Hodge ed., 1911) states that Kiakima was permanently abandoned during the Pueblo Revolt of 1680 when the inhabitants fled up Dowa Yalanne for safety from the Spaniards.

Kyaki:ma is on a small hill that forms part of the lowest bench on the southern edge of Dowa Yalanne. The site is located on the east side of a spectacular re-entrant that drains the entire top of Dowa Yalanne. A major spring is located west of Kyaki:ma, and in the nineteenth century a small stream issued from this spring. Kyaki:ma overlooks the alluvial valley bottom of Galestina Wash.

T.J. Ferguson, a scholar on Zuni archaeology, describes Kiakima's architecture as being "four irregularly shaped room blocks arranged around two plazas" and estimates approximately 834 rooms with a population of 1,085 persons.