The Bullywumpus is a famous game that was played at Kia Kima in the 1920s and ’30s. It was revived for the 75th Anniversary in 1991. But what is Bullywumpus? 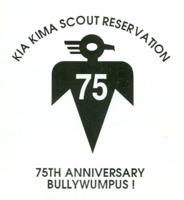 While preparing for the 75th Anniversary in 1991, the Chickasaw Council Camping Committee Chairman, Ron Edmonds, came across several references to a popular game at Kia Kima in the 1920s and ’30s called the Bullywumpus. It was decided to use the Bullywumpus as a special program during the 75th Anniversary summer with plenty of promotional material and excitement. The problem, however, was none of the documents that referenced the Bullywumpus actually explained what the game was. This led to the famous question used in the promotional materials: “What is Bullywumpus?” Well, Scout, you’d have to come to Kia Kima to find out!

The actual Bullywumpus in 1991 was an amorphous inter-troop competition that changed week-to-week based on what the Staff chose. It generally involved Scout skills and other competitions, similar to a Camporee event. The Bullywumpus became a signature feature of the 1991 summer. 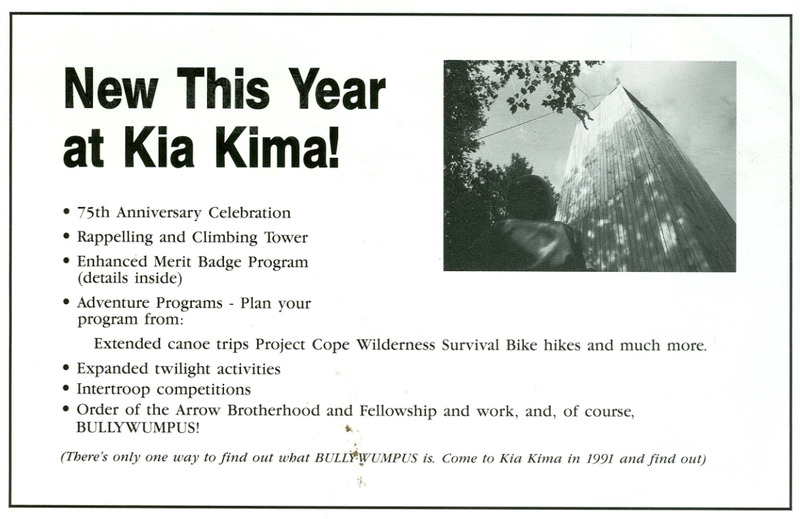 The original “Bully Wumpus” or “Bully Wumpus chase” was a popular camp-wide game played at Kia Kima in the 1920s and ’30s. The earliest documented reference to the Bully Wumpus is in a 1922 newspaper article reporting the final days of the summer camp season: “The ‘bully wumpus’ chase, which will take an afternoon and night to finish, will take another day out of the regular programme.” (Kia Kima Closes, Commercial Appeal, Aug. 10, 1922, at 12).

The Memphis-based newspaper, The Commercial Appeal, published an article in 1924 that described the game and how it is played. The first half of the article, which details the Bully Wumpus, is reprinted here.

The 80 husky boy scouts at Kamp Kia Kima, which is owned and operated by Chickasaw Council of Memphis and located three miles from Hardy, Ark., in the foothills of the Ozarks, are all keyed up for the big bully Wumpus chase to be held there Wednesday, July 16. Next to the events on the Fourth of July, the bully wumpus is the big event at Kia Kima. Starting at 2 o’clock in the afternoon, this event lasts until taps is blown.

The prize this year will be an old Indian club secured by Byron O. Lutman, scout executive, at Niagara Falls on his recent trip to the International Rotary Club convention as a delegate of the Memphis Rotary Club. This prize will be put in a ring in the center of camp, with half the boys defending it and the other half attacking and trying to take the bully wumpus. Each scouts [sic] wears a handkerchief onf [sic] his belt, tied bmy [sic] a string, which is known as his scalp. When this scalp is snatched by some other boy, he acn [sic] no longer take part in the chase.

After some attacker has succeeded in breaking through the ring of defenders without having his scalp taken he is allowed a period of two minutes to make his get-away with the prize. Then, at a given signal, every scout is for himself, trying to take the scalp of the lucky attacker, who holds the bully wumpus, before taps is blown.

The scout who holds the prize at the end of the chase is declared the winner and is permitted to keep it permanently. Incidentally, the winner is a camp hero for several weeks. The scout who takes the largest number of scalps during the chase is awarded a full box of chocolate bars.