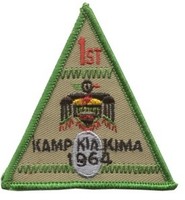 The triangle is a subtle symbol or motif that became associated with Kia Kima in 1964 with the opening of the Reservation. Upon entering the Reservation, the road splits just beyond the main gate and forms a triangle. Every unit camping at Kia Kima takes a group photo in the triangle with the Kia Kima sign. Also in 1964, the first patch for the "New Kamp" was in the shape of a triangle. These two events were likely an unplanned coincidence, but it created a motif that has persisted throughout Kia Kima's history.

Keeping in mind the existing symbolism of the triangle, the Kia Kima Alumni Association incorporated the triangle as part of its logo on February 5, 2015. 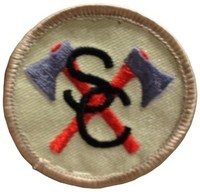 Interlocked initials are commonly used at Kia Kima to signify the individual camp and also the program area. Most follow the pattern of having the second initial lower and interlocking with the first initial. These are not commonly used on memorabilia, but they are used by staff on equipment, program area plaques, and staff paddles. Common initials are Camp Osage (CO), Camp Cherokee (CC), Scoutcraft (SC), Nature Lodge (NL), Waterfront (WF), and Handicrafts (HC).

A bear is a common symbol seen at camp because it is the totem of the local Order of the Arrow lodge, Ahoalan-Nachpikin Lodge #558. The OA lodge serves Kia Kima and hosts several events there every year. The bear and a bear's pawprint have both been featured on memorabilia, particularly OA Summer Fellowship patches.